Agence France-Presse reported that the oil shortage caused by labor disputes is getting worse and worse. French President Emmanuel Macron said on the evening of the 12th that the government will take responsibility and start the forced recruitment process for the strikers, hoping to "return to normal within the next week." On the morning of the 13th, Philippe Martinez, general secretary of the CGT, said in an interview with BFMTV, "Things may have developed in a good direction soon, but the practice of forced recruitment is like adding fuel to the fire." On the afternoon of the 13th, the CGT called on the Paris Mass Transport Company (RATP) and the French National Railways (SNCF) train drivers to hold a general strike on October 18 next Tuesday to protest the government's forced recruitment of oil refinery workers. Several unions including FO, Solidaires and FSU subsequently said they would join the national cross-industry strike on the 18th.

The strike action of French oil refiners has lasted for 17 days. The oil shortage has caused many industries to close down, which has seriously affected all aspects of people's lives. In the public health system where "human life is at stake", some ambulances even had to refuse long distances to save fuel. visit.

1. A number of trade unions called for a nationwide cross-industry strike on the 18th.

On the afternoon of the 13th, the labor union CGT Paris Mass Transport (RATP) and the French National Railways (SNCF) train driver union CGT-Cheminots announced that they will hold a general strike next Tuesday, October 18, to protest the government's enforcement of strong oil refinery workers. levy, "Defend the right of workers to strike".

French train drivers CGT union secretary Laurent Brun told AFP that the union will hold a union congress on the 18th and does not rule out the possibility of continuing the strike after the 18th.

However, the Transport FO union said it would postpone the strike, which had been planned for October 17-23.

On July 6, the French national railway has raised the salary of low-wage employees by 3.7% and the salary of management by 2.2%; while the Paris Mass Transport Company said that the average salary increase in 2022 has reached 5.2%.

On the same day, the Workers’ Forces Union (FO), the Confederation of Solidaires (Solidaires) and the United Union of Trade Unions (FSU), the Confederation of Civil Servants of the French Federation of Trade Unions (UFSE-CGT) and the Federation of Democratic Secondary Schools (FIDL), the National Movement of Secondary School Students (MNL), the French University Students Youth organizations such as the National League (Unef) and High School Life (Vie lycéenne) have also announced that they will join the national strike on the 18th.

2.The president hopes to "solve the problem in the next week" Union: forced recruitment is equivalent to adding "fuel" to the fire.

On the evening of the 12th, Macron called on the "L'Evénement" (L'Evénement) interview program of French TV 2 (France 2). operational again." Macron was interviewed by French TV 2 on the evening of the 12th. (Screenshot of TV video)

He also stressed that he "supports labor-management dialogue and negotiation" but "opposes blocking and bringing social life to a standstill." "I haven't forgotten all my compatriots in line (waiting to refuel)," he said. He pointed out that the government will forcibly use "recruitment" to solve the oil shortage problem.

On the morning of the 13th, TotalEnergies announced that it had agreed to a 6% salary increase in 2023 and distributed a bonus equivalent to one month's salary. But the union wouldn't budge, insisting on a 10 percent pay rise.

At the same time, the government launched a forcible expropriation process for TotalEnergies' Mardyck warehouse near Dunkirk. This is the government's second call-up action following the forced call-up of Esso-ExxonMobil on the 12th.

According to Clément Mortier, secretary-general of the Workers' Forces Union (FO), law enforcement officers went to the homes of the strikers with forced papers, asked them to sign and ordered them to return to work between 14:00 pm and 6:00 am the next day.

This "fueling the fire" completely ignited union anger, with TotalEnergies' CGT union European secretary Thierry Defresne announcing at around 15:00 that the strike action would continue across the board, accompanied by an "extremely high strike rate". He urged the management of the group to start negotiations immediately "from the same day", otherwise the situation of the forced fuel storage center "tomorrow (14th)" will only be "more intense". 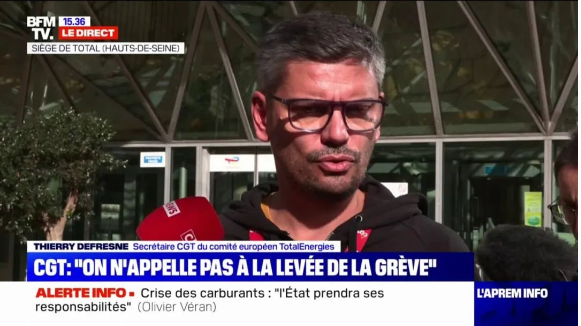 Thierry Defresne, Secretary of the European Department of the CGT union of TotalEnergies, was interviewed by reporters. (Screenshot of TV video)

TotalEnergies then announced that it invited unions to negotiate "at 20:00 that night". The group management said that in view of the "responsible attitude of the (group) team involved in the Dunkirk warehouse government call-up operation, the group management "invited all trade union representatives to organize salary negotiations at 20:00 that night".

On the other hand, on the afternoon of the 13th, Esso-ExxonMobil (Esso-ExxonMobil) management and the General Chamber of Labor (CGT) announced that the oil refinery in Fos-sur-Mer lifted the strike action. The union representative said that at 13:00 on the same day, the employees voted to lift the action; the management expressed "satisfaction with the end of the action".

But the strike will continue at another of the group's Gravenchon-Port-Jérôme site.